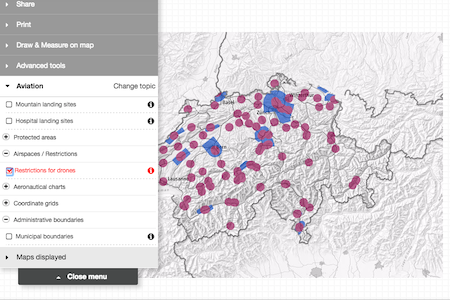 The federal government posted a statement that the map has been deemed necessary due to the rising number of UAVs in the country, with two near-misses when traditional airline pilots saw drones near their aircraft as they came in to land in Zurich and Basel. Swiss law states that it is illegal to fly unmanned aircraft within at least 5km of an airfield, with greater minimum distances for airports and aerodromes with an air traffic control. These restricted zones, as well as other airspace obstacles such as cables and power stations, will be marked on the map, with the ability to toggle all the various obstacles, landing sites, and other pieces of information. Authorisation is required to fly in such an area at a height of over 150m, and the map will inform the user of who to contact to apply for it.

The map is accessible with a browser at map.aviation.admin.ch  and is also as an app, called Swiss Map Mobile, developed in collaboration with Swisstopo.