Drone law specialist Piyush Gupta examines India's major new rules for the industry, including the need for permits, permission for every flight and penalties for infringements 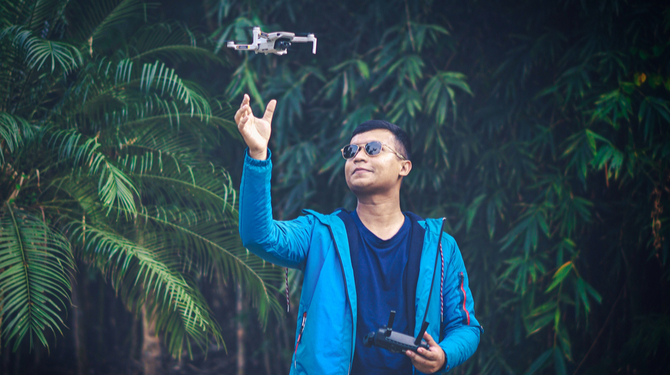 India’s Civil Aviation Ministry has cracked the whip on drone usage. The Unmanned Aircraft System Rules 2021, which came into effect earlier this month, form a comprehensive framework that dictates how individuals and businesses can use unmanned aircraft systems (drones) in India.

India imposed a sudden ban on the civil use of drones in 2014, but in the face of imported drones being widely available the government changed tack and introduced a draft version of the rules in 2018. Since then, India’s commercial drone space has been catching up and is predicted to grow at a CAGR of 12.4% over the next five years. Government initiatives such as Make in India, which promotes the domestic manufacturing of drones, are set to further fuel the growth of the country’s commercial drone market.

The product of around ten months of consultation, the rules are intended specifically for drones and are meant to encourage their use for security and commercial purposes. They supersede the provisions contained under the Aircraft Rules, 1937 – the statute which has until now governed their operation in India.

The rules apply to drones including aeroplanes, rotorcraft (the most popular type in India) and hybrids. They classify drones based on their maximum all-up weight (including its pay load) and aim to regulate

(b)         all persons owning, possessing, engaged in importing, exporting, manufacturing, operating, trading, leasing and/or maintaining a drones in India; and

A permit will be needed for all drones weighing more than 250g, which can only be flown by a remote pilot with permission from the Directorate General of Civil Aviation (DGCA) for every flight.

Anybody who operates a drone without being a licensed remote pilot could face a fine of up to ₹25,000 (around $345) under the new rules. There are also penalties ranging from ₹25,000 to 5 lakh (around $6,890) for the unauthorised import, buying, selling, and leasing of drones, depending on the offence committed. Such penalties will be more for heavier drones, with the rules also applying to those already in the country.

It is also forbidden to fly drones within 25km of international borders, around military installations, within 5km of international airports of major cities like Mumbai, Delhi and Kolkata or within 3km of the perimeter of any civil, private or defence airport.

When the draft guidelines were issued in India in 2018, there was pushback from within the drone industry against the No Permission, No Take-off (NPNT) clause – the only one of its kind in industry at that time. This required drone manufacturers to have a NPNT software add-on in their drones, without which they could not be sold in India. The mandatory requirement of NPNT has been ratified under the new rules, but there are now additional requirements with which drone manufacturers and operators must comply. These include that drones must have a global navigation satellite system receiver, return to home option and 360-degree collision avoidance system.

The NPNT requirement promulgated under the rules is in line with the intent of for each drone that is registered with the regulator having a unique identification number. This will feature on a unique identification certificate, without which a drone cannot be used, operated or transferred in India. The certificate will also have details including the drone’s category, class and model number and its manufacturer’s name.

The rules also clarify that a person will be authorised as an importer, manufacturer, trader, owner and/or operator of a UAS if, in the case of an individual, they are an Indian citizen and 18 years old or over. A company must be registered and have its principal place of business within India and its chairman and at least two-thirds of its directors must be Indian citizens. A firm, association, local authority or any legal entity must have its principal place of business within India – whether incorporated or not.

In a nutshell, what the rules try to promulgate is the concept of substantial ownership and effective control in respect of operating a drone in India, in which ownership and control should be vested with Indian nationals.

The ownership and control provisions set out under the rules are important, as they’re consistent with the government’s drive to streamline regulatory policies and ensure that drones can be operated safely and in compliance with the various regulatory conditions. To this effect, India has been amongst the first nations to establish drone pilot training schools.

In its bid to make India a drone hub, the rules also recognise the requirement of leasing drones and seek to regulate that arrangement as well. The onset of the Covid-19 pandemic has highlighted their range of commercial uses – including for rescue operations, surveillance, delivering goods and transporting time-sensitive medical supplies.

Until recently, most of these operations have been at the behest of the government and have been controlled by drone pilots who, in most cases, have incorporated a private company in India. But with the ‘drone leasing’ arrangement promulgated under the rules, duly trained and accredited individuals can also throw their hat in the ring and work with drones for commercial purposes. So, we may see a spike in drones being used by, say, property agents using drones to create video tours of properties on their books, or car insurance companies using them to assess an accident site and document the damage with photos and video.

Additionally, there has been some concern over operation of drones in respect of data privacy. The rules attempt to address this by putting the onus of ensuring the privacy of individuals and property over which the drone is flying squarely upon the drone operator/pilot.

Finally, the rules also promulgate the establishment of drone ports. Extremely heavy traffic in cities and the lack of roads and infrastructure in some rural areas in India can make providing people with vital amenities challenging. Establishing drone ports is a significant initiative in which the government intends to create ‘green corridors’, especially between hospitals and remote villages, to ensure speedy delivery of medical supplies and other vital resources.

The rules do seem to have their heart in the right place, but it could still be a challenge. This is because making laws in India is one thing, but enforcing them, in light of such rampant corruption, is a different ball game altogether. While the rules do provide for financial penalties for contraventions, it will be interesting to see how the regulator enforces these penalties.

Piyush Gupta is a partner at RHTLaw Asia specialising in aviation and drone laws, and heads the firm’s transportation and logistics practice in Singapore

related topics
Drones Asia
recent
Popular
twitter
Tweets by RLawJournal
Your experience on this site will be improved by allowing cookies.