New Portable Rival Too Small For The FAA

While GoPro and DJI are both releasing new drones with portability their main focus, another drone has just been released that may have an unexpected advantage. 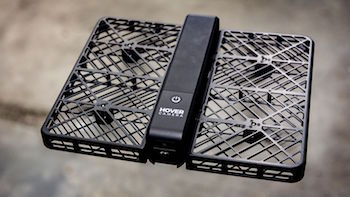 The Hover Camera Passport, a foldable drone with a built-in camera, has just been unveiled by Zero Zero Robotics. Designed as a personal photographer, it uses AI, sonar, and a downward-facing camera to capture the subject, and can be easily controlled with a smartphone app. After being released, it automatically hovers and can immediately capture images and video.

Weighing only 242g, the Hover Camera Passport doesn't fall under the FAA's Small UAS Rule, of which the threshold is 250g. Both the Karma and the Mavic require registration with the FAA, weighing 1,006g and 734g respectively, and the lighter design of the Hover Passport will make it very competitive.

While GoPro and DJI have brought a lot more features to their units that will entice drone flying enthusiasts, for a novice user that is looking a simple, high-quality hovering photographer, the lack of an extra step to take in the process of purchasing, combined with the smaller and price and weight, could give this new portable entry a competitive edge.