Leading drone manufacturer DJI has written a letter to the University of Dayton Research Institute (UDRI) asking it to withdraw a misleading video and blog post about collisions between drones and traditional aircraft. 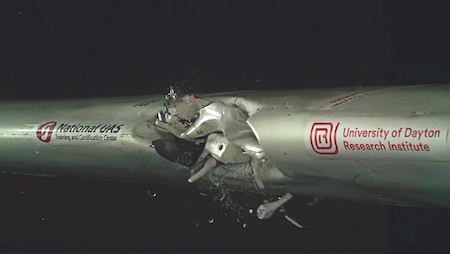 It shows a DJI Phantom 2 drone being launched at the wing of a small plane to demonstrate the effects of collisions. The UDRI has not disclosed its methodology and data, and admitted that a test of a simulated bird resulted in more damage being caused, but it has only showcased the drone video. A case of “reverse product placement”, it is the image of a Phantom drone crashing that will stick in people’s minds because of this omission and the lack of context provided.

DJI has complained in its letter that the video actually creates an inconceivable scenario for a crash between a drone and an airplane. It assumes that a Mooney M20 light aircraft is travelling at its top speed of 200mph, and that the drone it encounters is flying faster than its own maximum speed of 33.5mph. Crucially, the letter notes, the aircraft could only achieve this speed at full cruise, which typically occurs a mile above the ground. At an altitude where it could potentially encounter a drone, it would be travelling at half this speed, which in turn would generate less than one quarter of the collision energy. The speeds used were contrary to the Federal Aviation Administration (FAA) crash test parameters, which use a sea-level cruising speed for bird crash tests, between 161-184mph for a Mooney M20.

DJI claims that these elements of the video, combined with the UDRI’s lack of data or the fact that it was not created as part of a legitimate search enquiry, discredit DJI and their devices, by creating a video that is purposefully more damaging than it should be, with little information to accompany it to inflame the public perception of drones. They have demanded the withdrawal of the video, while also promoting the extensive safety tests they undertake themselves. UDRI has not responded to any of the claims made by DJI.