Drones on the Up

A new report from PWC looks at the potential future value of the drone market. 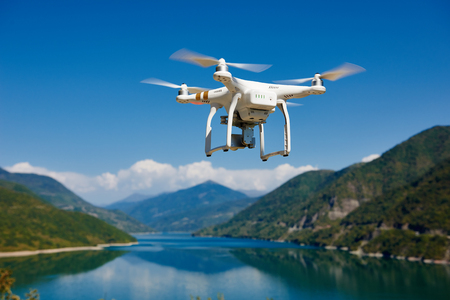 PricewaterhouseCoopers released a global report examining the commercial applications of drone technology. ‘Clarity from above’, dated May 2016, seeks to quantify the impact of the emergent technology across industry sectors. The use of the term ‘drone powered solutions’ reflects the broader applications of drones, rather than just the use of the machines themselves, such as the increased ability for capturing data. Consideration is also given to the regulations involved and their impact in the development of the drone industry.

$127 billion is the value of current business services and labour that could be replaced by drone powered solutions in the near future, according to the report, broken down across these sectors.

One of the biggest assets that drones provide is the speed at which they can monitor a large area. This is particularly useful in infrastructure and agriculture, the sectors that have the largest values in the report. Providing detailed field data improves
the speed and quality of the planning stage of a construction site, while during the construction stage they can provide incredibly fast progress reports, overlaying plans onto photos of the actual state of construction, able to identify discrepancies of even 1cm. This level of accuracy, combined with their speed, demonstrates the value of drone powered solutions to this sector.

Performing dirty, dangerous, difficult jobs is one of the principal uses of drones, allowing a lot of sectors to increase their level of
safety for employees. Maintenance of radio or phone towers is a potentially dangerous job for someone, risking injury or loss of life, especially in bad weather. Sending up a drone has little risk of harm and also avoids the need to set up any equipment that a human would need to climb the tower, enhancing its speed.

The ability for drones to assist in sectors such as mining is significant, and demonstrates the huge value and untapped potential for this technology. Mostly used in open-cast mining so far, drones are a faster and cheaper replacement for helicopters and can provide solutions for the labour-intensive stages of planning and exploration. While still limited, due mainly to their reliance on GPS which is ineffective underground, there are future solutions using 3D scanning currently being researched. Telecommunications is another area where the potential for drones to assist in broadcasting signals is greater than their current application.

The report concludes that for drone operations to be commercially viable, national and international regulatory frameworks may need to be completely overhauled, instead developing a set of international regulations, which would provide global consistency for UAV use. The International Civil Aviation Organisation (ICAO) is working on guidance for UAV operations and expects to complete its standards and recommended practices by 2020, with a manual for UAV operations ahead of that by 2018. The delay means that current regulation needs to be able to counter the various issues that arise with the use of drones, especially with regards to privacy and safety.