Global leader of drones DJI has condemned a recent video posted by a drone user that shows the landing of aircraft in Tel Aviv’s Sde-Dov airport. 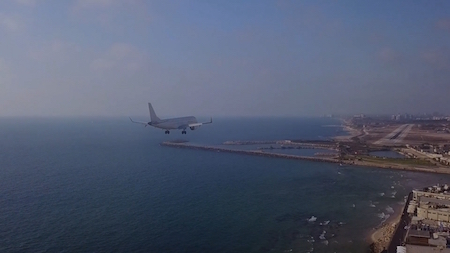 Niv Stubenski, 20, the drone owner, has been arrested and his UAV and computer have been confiscated. He claims to have filmed the video using a DJI Mavic Pro quadcopter and the Chinese firm has launched its firm condemnation in response at what it sees as reckless flying:

“As the world’s largest drone manufacturer, we stand ready to assist national aviation authorities as they investigate a recent wave of photos and videos showing clear and intentional lawbreaking in ways that pose real danger to manned air traffic. DJI cooperates with lawful requests from governmental authorities investigating crimes that may involve our technology.

“DJI, like other interested parties, has developed a proposal for identifying airborne drones. We laid out the framework for such a system in a white paper released in March.

“DJI’s GPS-based geofencing system warns unauthorized drone pilots not to fly near airports. DJI was the first civilian drone manufacturer to incorporate geofencing into its products, in 2013. This technology provides warning information to drone operators based on the location of the drone, and in some locations automatically prevents flight of the drone, either by disabling the motors before takeoff or by causing an in-flight drone to pause outside the designated area without entering. These locations include airports, places with temporary increased aviation activity, disaster emergency zones or locations that raise serious national security concerns.  The Sde Dov Airport shown in the video has geofencing protection active around its runway location, extending five miles outward from the airport area along a rising slope.

“Despite the advisory and educational resources DJI have put in place, we ask our users to ensure the safe and legal operation of their equipment wherever they are, and we expect all our customers to operate responsibly and to respect the safety and security needs of sensitive locations that are reflected in DJI’s geofencing systems.

“DJI will continue working together with regulators to help our users understand the safe and legal operation of aerial technology. We also continue to support governments in creating a regulatory framework that promotes safe skies that are also open to the innovative potential of unmanned systems.”

This is not the first time this has happened this summer. On 2nd July, a suspected drone flying too close to the runway caused the temporary closure of London’s Gatwick airport. DJI issued a similar statement of condemnation, while recognising the fact that early reports of drone incidents often prove to be false; the firm has taken a “safety-first” approach and seeks to remind its users to always fly safely and lawfully.