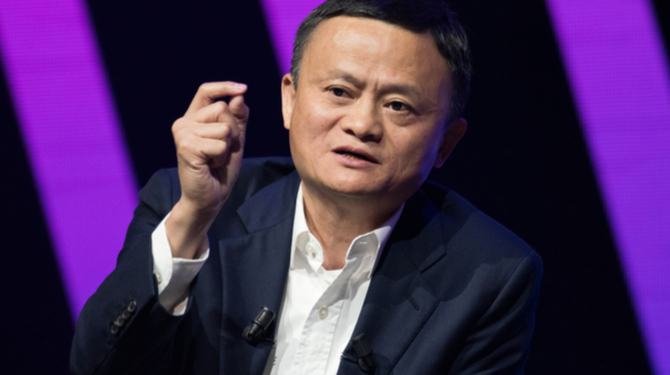 Shutterstock
Alibaba founder Jack Ma. His criticism of China’s financial regulation system at the Bund Summit in Shanghai, when he accused it of stifling innovation, is widely held up as causing the suspension of Ant Group’s IPO.

As first reported by the Financial Times, China’s largest e-commerce operator Alibaba recently had its ‘UC Browser’ removed from several Android app stores in the country, after being accused of allowing misleading medical advertising through its browser.

Accusations that the tech giant allowed private hospitals to bid for the names of China’s best-known hospitals in keyword searches were aired on a television show from state-owned broadcaster CCTV.

Amid ongoing conflict with the Chinese government, Alibaba reacted by immediately removing the content. It added in a statement: “We attach high importance to problems shown in the show and quickly conducted a series of measures to check and correct. We will further enhance content review and shoulder more responsibility, and provide good info services with stricter standards.”

The measures taken against Alibaba closely followed an address President Xi Jinping gave to China’s top economic committee in which he indicated that the country’s crackdown on large technology firms is just beginning. According to CCTV, he stated that “platform companies are growing in an inappropriate manner and therefore bear risks. It is a considerable problem that the current regulatory regime has failed to adjust.”

He also said that regulators will “step up” efforts to improve the regulation of China’s large internet companies.

Patti Kachidza, senior technology and finance lawyer at Axiom Global, believes a ‘stick and carrot’ approach is likely to be adopted: “In recent years, the Chinese government has been consistent in articulating and implementing its ambition to become a cyber superpower. This has included huge funding incentives and the creation of AI hubs at a massive scale. Tech companies have been a part of this, and their collaboration with government has both enabled their scaling and success, but also increased the influence of the government in their corporate strategies. The deletion of Alibaba's UC browser from Android app stores is a not-unexpected consequence of the decimation of tech companies’ independence through their increased collaboration with government initiatives.

She added that while this might appear to be "draconian regulatory skulduggery", it does not necessarily imply that tech firms are falling out of favour with the government, or that these interventions are not a legitimate response to prevent companies using technologies to flout consumer data protections. "Tech firms like Alibaba are simply ‘too big to lose’ and are key players in the execution of plans for Chinese market dominance in all things AI. In the future, we can expect to see a stick and carrot approach, in which companies are supported when their activities align with the Chinese Communist Party’s objectives, and censured when any aspect of their activities are considered to be at cross purposes with the CCP’s aims."

The crackdown in China was evident last November when Beijing issued draft rules aimed at preventing anti-competitive behaviour. Earlier that month, Chinese regulators had also abruptly suspended the record $34.5bn Hong Kong-Shanghai IPO of Ant Group. Regulators claimed that changes to the fintech regulatory environment, among other major challenges, were the cause of the suspension. But many analysts believe that Alibaba founder Jack Ma publicly criticising China’s financial regulations system just before the planned IPO was the deciding factor. Alibaba sold Ant Group, which is China’s biggest online payments platform, in 2011 but remains a major shareholder with a 33% stake.

In December, an investigation into Alibaba over alleged anti-competitive behaviour was launched, with the State Administration for Market Regulation confirming the tech giant was being investigated for “suspected monopolistic practices”. These practices required merchants to sign up to exclusive agreements that prevented them from offering their products on rival platforms, known as “choosing one from two”.

With allegations of misuse of consumer data and concerns over online lending platforms, which form part of a chaotic financial system carrying a dangerous amount of debt, regulatory tightening to lessen the power of major tech players such as Alibaba and Tencent is seen as necessary by Chinese consumers. Regulators are often playing catch up with an economy that is advancing rapidly and clampdowns are enforced to address problems that have arisen through gaps in regulation.

Kachidza added that it should be kept in mind that regulators, even those in liberal democracies worldwide, exercise similar powers to a greater or lesser extent, including the use of fines. "In light of Alibaba’s swift undertakings to address the perceived transgressions, it may be premature to determine whether the deletion of its UC Browser signals a precursor to the tech company becoming a state controlled enterprise, or is simply a reining in by the government. Time will tell.”