Deployed on 12th February at Zhengzhou East Railway Station in Henan, the new security robot is assisting passengers passing through. 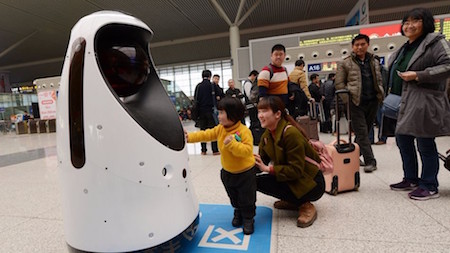 The E-Patrol Robot Sheriff, standing at just over five feet in height, is built with a system of four high definition cameras that allow it to safely navigate the station independently, directing itself to a charging station when its battery runs down. It uses facial recognition software to track and follow persons identified as suspicious or even potential criminals, passing the images onto security if necessary.

In its daily routine it can respond to commuters’ questions, helping to direct them across the station, while its various sensors enable it to keep track of air quality and temperature changes, allowing it to identify potential hazards and alert the appropriate authorities. It even discovered a small fire on its very first day.

The release of this train station robot comes a few months after the debut of a similar robot – called AnBot – at Shenzhen International Airport. AnBot is able to travel at speeds of up to 18kmph as it moves across Terminal 3, assisting passengers. It is even armed with an electrically charged riot tool for security purposes; it is unknown if its smaller cousin in Zhengzhou train station is armed similarly.