Bill introduced in Congress to prime digital assets for regulation 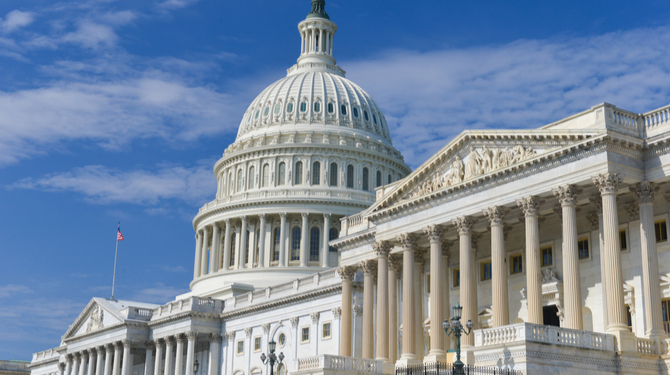 A bipartisan group of US lawmakers has introduced a bill in Congress to form a committee to recommend updates to the regulation of digital assets.

The envisaged working group would consist of industry specialists alongside representatives from both the Securities Exchange Commission (SEC) and the Commodity Futures Trading Commission (CFTC).

Together they would consolidate and consider the efficacy of existing regulation and ultimately decide whether individual digital assets should be governed by either the SEC or the CFTC, as securities or commodities respectively.

If the bill were to pass into law, the group would be convened within 90 days and instructed to publish an in-depth report in a year’s time.

The move comes as the appointment of former CFTC chair Gary Gensler as SEC chair, coupled with the widely anticipated choice of cryptocurrency expert Chris Brummer of Georgetown University as the CFTC’s next leader, fuels expectations digital assets are set to become more tightly regulated in the US.

Ashley Ebersole, former SEC attorney and partner at Bryan Cave, said: “The confluence of a new SEC chairman who’s well versed in digital assets, a rumored new CFTC chairman who is very FinTech forward and potential congressional action that requires the agencies to work with industry on a report outlining measures to ensure the US remains competitive globally in the digital asset space means 2021 could be the year initial steps are taken toward clear regulation.”

Amy Davine Kim, chief policy officer at the Chamber of Digital Commerce, added: “The United States can no longer do nothing. For more than a decade, despite good intentions, the industry has operated in an opaque, fragmented and confusing regulatory environment with respect to standards for custody, private key management, cybersecurity, business continuity and registration and reporting requirements, to name a few.”

At present, there are taxonomical dilemmas over recently-invented cryptoassets that inhibit regulation, even as disputes reach the courts. The digital assets committee would be briefed to examine issues around private key management, cybersecurity and custody of digital assets, with a view to making recommendations for augmenting regulation. The efficiency of and possible improvements to primary and secondary digital asset markets would also be a key focus, with customer protection a priority.

Globally, pressure is growing to improve the regulation of digital assets, with cryptocurrencies looking like the most immediate target.

In November 2019, a legal taskforce set up by the UK government published a legal statement that set out to clarify key issues including ownership and transfer of crypto assets and whether they should be treated as a property or goods.

The statement’s "overarching conclusion", according to an analysis by Gowling WLG, “was that English common law is well able to deal with and adapt to technological developments and has a strong track record of responding flexibly to new commercial mechanisms, which makes it the perfect 'home' for transactions involving these technologies, and related disputes.”

The statement was referred to in a landmark New Zealand judgment last summer, in a dispute that arose following the collapse of the New Zealand cryptocurrency trading exchange Cryptopia, which determined that cryptocurrencies were ‘property’ and capable of being held on trust.

Last month, New York’s attorney general Letitia James announced a settlement with cryptocurrency Tether and exchange Bitfinex in which they agreed to pay an $18.5m penalty without admitting wrongdoing. The settlement alleged Bitfinex had covered up the loss in 2018 of around $850m held at a Panama-based entity and made up the shortfall by “transferring hundreds of millions of dollars from Tether.” The groups have also been barred from operating in New York.