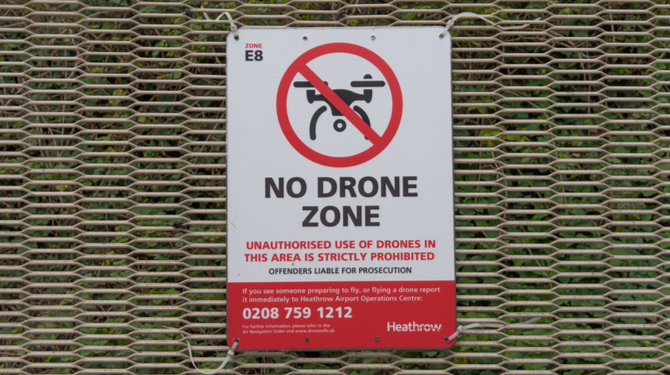 Counter-drone technologies have been a blind spot for most governments across the world. But with drones now being used for commercial purposes and available for purchase by the general public, it is becoming increasingly urgent to protect civilians and civilian infrastructure against the threats they pose.

Real danger can arise from an inept or reckless drone operator, who could do something like fly a drone too close to an airport, risking collision with aircraft. But a threat could also be as grave and mala fide as, for example, a drone bearing ammunition being deliberately flown into a structure in an act of terrorism.

As the number of drones increases, so too does the availability of counter-drone systems. These use a variety of methods to detect nearby aircraft at low altitudes, including radar, radiofrequency sensors and electro-optical/infrared cameras. However, as with all technology, these systems have weaknesses that have the potential to be exploited. For instance, radars are ineffective at distinguishing between birds and drones, and many radar systems are reliant on line-of-sight plus the object’s flight movement to consistently track it. Counter-drone systems themselves can also pose dangers, such as electromagnetic and radiofrequency interference affecting air traffic management.

Existing counter-drone systems are failing spectacularly against the threats posed by drones, especially in commercial environments. A thorough understanding of both the applicable law as well as the technology’s functionality is the over-arching need of the hour.

In a bid to address this, the US government has recently released an advisory on the application of federal laws to the acquisition and use of technology to detect and mitigate unmanned aircraft systems.

The advisory has been jointly issued by the Federal Aviation Administration (FAA), the Department of Justice (DoJ), the Federal Communications Commission (FCC) and the Department of Homeland Security (DHS). It provides a brief overview of the applicable federal laws and specifically addresses two categories: (i) the provisions of the US criminal code enforced by DOJ, and (ii) the federal laws and regulations related to aviation safety and efficiency, transportation and airport security, and the radiofrequency spectrum administered by the FAA, DHS, and FCC respectively.

Per the advisory, systems that detect the physical presence of an unmanned aircraft system (UAS), or signals sent to/from the UAS, may violate federal criminal surveillance laws depending on whether such systems capture, record or intercept the electronic communication to/from the UAS and the type of communication involved.

Similarly, the mitigation capabilities of counter-drone technology may implicate criminal prohibitions against intercepting and interfering with communications, damaging a ‘protected computer’ and damaging an ‘aircraft’.[1]

In addition to breaching federal criminal laws, the acquisition, installation and use of UAS detection and/or mitigation technology may violate other laws and regulations administered by the FAA, FCC and the Transport Security Administration (TSA). Such additional laws may cover (amongst others) those in respect of use of airspace, operating certificate(s), interfering with and interruption to air commerce, unauthorised use of spectrum (for radio communications on frequencies requiring individual licenses), and sale and operation of jammers for wireless and radio communication(s).

In a nutshell, governments and law enforcement agencies across the world need to be able to look into the sky, see a drone and instantly know whether the drone is supposed to be there or not and, if it is not supposed to be there, know exactly where the drone has come from and who is it registered under for the offenders to be brought to justice.

This is exactly what India’s institution of the Digital Sky platform aims to achieve. The first-of-its-kind Unmanned Traffic Management (UTM) system facilitates registration and licensing of drones and operators in addition to giving instant clearances to operators for every flight. The controversial “No-Permission, No-Take-off” (NPNT) requirement – long considered the bane for drone manufacturers and operators in India – might just be the ‘simple’ answer that sophisticated counter-drone systems are unable to address.

The Digital Sky platform allows only those drones that comply with the NPNT protocol to operate in areas demarcated as green and yellow zones, permitting them to fly over almost 70% of the country. Drone flights over urban areas, near defence and strategic installations, airports and border areas, which are categorised as red zones, will require clearance from relevant security agencies before take-off. This means that for green/yellow zones, operators will get automatic clearance and for red demarcated zones, the security agencies will receive specific clearance request. All data and information is uploaded to the Digital Sky platform so that there is no scope for arguments to the contrary at a later stage. Once the operator has been identified and intercepted, bringing the alleged offender to justice can be left to the discretion of the judiciary.

To conclude, it can be stated that both drones and counter-drone technologies play a vital role in maintaining a healthy drone ecosystem, provided they are used by private entities in a manner that does not circumvent civil liability, nor does it become a threat to national security.

[1] In the FAA Reauthorization Act of 2018, the US Congress codified the terms ‘unmanned aircraft’ as an aircraft that is operated without the possibility of direct human intervention from within or on the aircraft – 49 U.S.C. ss 44801(11).