The African Union (AU) and the New Partnership for Africa’s Development (NEPAD) have released a report examining how drones can transform the welfare of agriculture on the continent, “Drones on the Horizon: Transforming Africa’s Agriculture”. 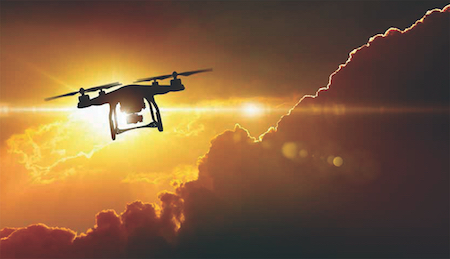 This is not the first drone-related initiative to be tested in Africa: there have been successful trials of drone-based deliveries of lifesaving medical equipment, as carried out by Zipline in Rwanda and Tanzania. This report instead looks at how the technology can be used in a farming context in the different regions of the continent.

Drones for precision agriculture is a farming management concept based upon measuring and responding to inter- and intra-field variability in crop and animal production. Unmanned vehicles have the ability to map the land, survey crops, assist with land use planning, cargo delivery, inspection monitoring and surveillance, insurance and damage assessment, and management of agricultural assets. Satellite images have been used for some of these purposes before in agriculture, but the advantages that drones have is the ability to capture high-resolution images under cloud cover and at the desired times.

Deploying drone technology in Africa presents its own challenges. Largely, these can be classified under four broad categories: technological, economic, social, and legal. On the last point, UAV regulations across the African continent are still in their infancy and ill-equipped to allow mobilisation of the technology for agriculture. The overall trend is that they are too restrictive, hindering the development of the UAV industry, with government agencies having to step in to work on solutions, which could bring the technology to educated youths in rural areas.

Only about 26% of all African countries have UAV regulations in place. Mauritius, Morocco, Rwanda, South Africa and Tanzania are among the countries where UAVs are currently deployed for crop scouting purposes but the widespread use of drones in the agricultural sector has not yet materialised.

UAV governance is a multi-sectorial issue that needs to bring in all the relevant actors to the decision-making process. The relevant National Civil Aviation Authority (NCAA) will regulate civilian airspace in each country, maintaining control over both the development and enforcement of regulations. NCAAs typically regulate critical aspects of large manned aircraft, their airworthiness and their operations, responsible for: (i) checking on airborne and ground-based equipment affecting flight safety; (ii) pilot licensing; (iii) issuing flight permits; (iv) defining standards for UAV operations and minimum requirements for operating different UAV classes based on take-off mass and size.

The International Civil Aviation Organisation (ICAO) offers a UAV toolkit with a collection of current national UAV regulations on its website, but no African country is included on the database. South Africa was the first country to implement and enforce a comprehensive set of legally-binding rules governing UAVs in July 2015. A total of 14 African countries published dedicated UAV regulations by July 2017, which represents 26% of the total number of countries in Africa. Seven countries, under “minor references”, appended early ICAO guidance to their aviation regulations. It is noteworthy that the guidance is entirely replicated suggesting standardisation of the regulations has already been a factor in Africa.

Although South Africa has regulations in place, they do not provide ideal conditions for the development of a thriving UAS service industry. Some UAS companies are in fact operating outside the framework of the law due to the heavy-handed approach that the regulations take, or else they operate in neighbouring countries in order to remain in business.

South African regulations consider that using a drone for generating agricultural data means that the unit is being used commercially, meaning it should be governed in the same way as a commercial manned aircraft. This in turn means that an operator is required to comply with a number of key steps, including, but not limited to: (i) obtaining a remote pilot license; (ii) registering the aircraft; and (iii) obtaining an air service license (ASL) from the Department of Transport and obtaining a remote operator’s certificate (ROC) from the South African Civil Aviation Authority. Compliance with all these steps requires a number of positions to be filled – quality assurance manager, flight operations manager, safety officer etc. – meaning that a single operator cannot comply with all the requirements, even though some operations are likely to have low numbers of employees.

Compliance ends with a total cost of R500,000 (US$38,700), and a time cost of two years for completion. Since the regulations were published in 2015, only 14 companies have been licensed to operate, with a backlog of over 400 application

African innovation is susceptible to being hijacked by global players due to weak IP structures and limited awareness. There are reported incidents of young innovators being cheated out of benefitting from their inventions, even if no specific IP cases have yet to be documented within the UAV sector. Legal liability for drone usage will rest on the inventor, the controller, the owner, or the IP holder. There need to be controls on who can create, own, or use a drone, with any incident or infringement that involves a drone will be attributable to one of these people.

Drone technology has been noted as being subject to “patent trolls” – people who acquire patents with the aim of defrauding entities with a legal or legitimate interest in the technology. Patent trolls would be able to deviate from the patent holder’s stated and intended use of the drone, and misuse the technology.

With regards to agriculture, the use of drones in specific advisory capacities for crop maintenance can have significance on the global scale, meaning that African governments need to take this opportunity to strengthen national IP frameworks and legislation to protect an expansive and profitable industry.