Hokianga Restricted Airspace is an 874 square kilometre area in New Zealand that has been opened up to trials of UAVs flying beyond visual line of sight (BVLoS). The test range has been dubbed “Incredible Skies” and it extends the opportunity for a new wave of UAV research, both in New Zealand, and globally. 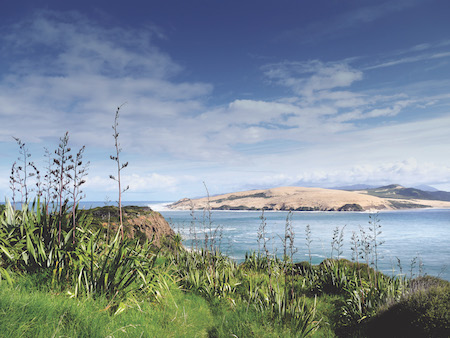 Paua Interface Ltd is the New Zealand technology company that is the authorised administrator of the Hokianga Restricted Airspace. Managing Director Robyn Kamira talks about the project, BVLoS flying, and the impact this will have on the world of drones.

The Hokianga region in New Zealand’s Northland features stunning landscapes with mountainous sand dunes and naturally formed sand sculptures, the Tasman ocean to the West, the Hokianga Harbour, native and exotic forests, farmland, and pristine skies. Above it has clear skies, and below, a number of small indigenous communities that draw modest incomes from a predominantly primary sector economy.

Some of the communities are isolated and frequently cut off due to weather events. Access to medicines and crisis support is poor and results in higher rates of morbidity and mortality than for their urban counterparts. These factors were the driver behind Maori owned company Paua Interface's desire to alleviate the effects of isolation using drones. However, to meet the regulatory and technological challenges a dedicated and uncongested airspace was needed as a test bed for the development of a regular medical drone service that could be proven, replicated and scaled.

In addition, the CAA and Paua agreed that the airspace should be made available to any company, from anywhere in the world, wanting to trial drone related technologies and so Incredible Skies was born.

The Restricted Airspace opened and was announced in June. The first phase is 6 months through to December 2017. A second temporary phase is planned in the first half of 2018, followed by a permanent status from mid-2018 onwards.

Trialists are still progressing through various regulatory requirements with the CAA. The first trials are scheduled for October to December for the medical drones and will focus on endurance and BVLoS. Other trials that have been proposed relate to weather, waterways, devices and sensors, mapping and delivery use cases.

All trialists need to meet the regulatory requirements of New Zealand's CAA. In some cases, this may include obtaining certifications under the Part 102 regulations. In others, the certifications they hold in their own countries may be considered in a reciprocal arrangement. The CAA will consider applications on a case by case basis.

In addition, the trialists will need to meet the requirements of the Incredible Skies Operations Plan, which provides operations and safety plan requirements for every trial. These include things like landowner permissions, flight path planning, location safety and more.

Approval From the CAA

The regulatory thresholds are high and the proposal for Restricted Airspace called for a range of technical and legal conditions to be met.

Generally, Restricted Airspace is largely designated for military or conservation purposes. So Paua's proposal to seek dedicated airspace was a rare request. It needed to include three key elements: a credible organisation that would provide the administrative authority in alignment with the CAA's regulations; a convincing rationale; and evidence of landowner and territorial authority support for the areas beneath the airspace.

The particular regulations that apply are:

Civil Aviation Rules, Part 71 Designation and Classification of
Airspace.
CAR 71.153 (c) that stipulates the responsibilities of the Administering
Authority in a restricted airspace.

(c)   The administering authority responsible for a restricted area—

NZ's CAA is considered to be progressive and particularly with the introduction of its new Part 102 rules in 2015, it has laid the foundation for technological progress that can be tested here.

Impact on the Drone Industry

Given the distance NZ is from other locations this creates an accessible resource and opportunity to help NZ companies to develop their technologies without the added burden of excessive location costs, or restrictive regulations.

It has also helped to make the commercial drone sector visible in New Zealand and in a short time has contributed to a positive public awareness of how drone technologies can enhance lives and make a difference to a wide variety of industries. The mainstream news media has been positive and helped to dispel public misinformation regarding privacy and security by publishing articles and interviewing the Incredible Skies team.

In addition, the CAA is interested in how its Part 102 regulations that address BVLoS can enable the industry to grow. Paua has a commitment to contributing to the development of regulations and how they are applied by working collaboratively with the CAA.

Key trial challenges for any company will likely be around safer BVLoS flight, autonomous flight and integration with other airspace users (e.g. manned aircrafts, recreational air sports, etc). In particular, this is impacted by the reliability and availability of communications with drones. The options in rural areas are not reliable, and often there is poor or no telecommunications infrastructure to provide the communications methods that are needed.

Delivering parcels in cities has a novelty value, but delivering significant high value payloads (e.g. medicine, emergency services) where land-based delivery options are limited or impossible, and where long distances are required, are a compelling motivator for advancing research and development in BVLoS flying. Rural use cases are likely to drive developments that in turn will eventually serve urban use cases.

The NZ CAA is considered progressive and enabling, and the political and economic stability in NZ is a key factor that enables a project like this to be established. While there are other test ranges around the world, they tend to be in places that don't provide the range of terrains that are available in a single and relatively compact region (e.g. large areas of relatively flat terrain).

Overseas companies tell us that regulations in their own countries can make it impossible to develop BVLoS use cases to test. They are interested in how they could come to NZ and satisfy New Zealand's regulatory requirements first, because, they say, the CAA has provided an achievable pathway. Then they may use the NZ certifications to help them to transfer their “missions” elsewhere.

The critical factor that all aviation authorities are interested in is safe flight – both in terms of physical safety (drones falling) and security (rogue drones). For many countries, it is the latter that restricts their regulatory environment and their hesitancy to enable BVLoS flight. Tension occurs when industry sectors demand that they be authorised to develop and apply BVLoS in their respective sectors.

While it is likely that BVLoS drones will eventually become common place, the technologies to reduce or eliminate risk are still under-developed. Incredible Skies is all about enabling the drone sector to design, build and test their technologies in a safe airspace where the collective contributions of a critical mass of companies will eventually lead to the opening of BVLoS flight around the world.

Incredible Skies aims to be the drone centre for New Zealand and potentially the Asia-Pacific. We now have Rocket Lab on the south-east coast of the North Island doing fabulous things for the high tech sector in New Zealand, and we believe that the country is primed to welcome in a range of very credible high tech projects that will have positive global impacts.

The area has a strong indigenous population that is supportive of Incredible Skies trials and the economic potential that it may bring. The local communities below the airspace will initially provide logistical and operations support, and eventually build capacity to participate in businesses and professions in the sector. Paua is fully committed to the development of communities and the transfer of benefits to those who live and are impacted by what we do. Incredible Skies has opened up new and exciting conversations with communities and economic agencies about how they might leverage the activities and events in the test range.

In addition, we're inviting global drone racing and challenge events from anywhere in the world to come to the space and we will help them meet the regulatory thresholds required by the CAA. It's a chance to hold exciting world drone events that bring competitors and audiences from all over the world (in real life or via digital experiences), while showcasing the beautiful environment in which the airspace is located.

Finally, we are planning to build a state of the art drone test range and excellence facility that will attract designers, scientists, technologists and courses and workshops. The goal is to develop and build capacity in NZ and to have a long term economic impact on the communities in the region.