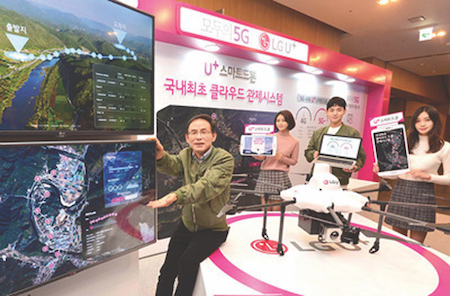 In collaboration with the Korean cellular carrier LG U+, the U+ Smart Drone UTM System can confirm a drone’s position when it is flying Beyond Visual Line of Sight (BVLoS), allowing for the safe flight of drones for disaster monitoring or transport logistics at night. Users can connect to the UTM system via smart phones, tablets, or PCs with fully HD images captured by the drone live through IPTV.

The new system can allow remote flying of drones at a distance of up to 100km, as long as the network is connected. The whole process can be conducted autonomously, from the point of take-off to the safe return. Multiple individuals will be able to monitor a drone at the same time, with on-site conditions such as drone flight speed, weather information, battery level, and attitude and longitude of the flight path all available for assessment. The same flight plan can be prepared and used for multiple drones, opening up the possibility of using drones for a variety of applications. A further feature allows an autonomous drone to stop flying if it recognises another drone, an aircraft, or birds. Furthermore, it has a parachute to assist safe landing.

In a live demonstration of the UTM system, a drone flying autonomously was able to locate a 6 year-old boy wearing a red jacket in Kamiwa Koro Park in Seoul after only three minutes of flying. Having successfully spotted the “lost” child, it sent real-time information about the location to nearby safety personnel before it returned home along its planned route. Director of operations at LG U+ Kwon Yeon Hoon said that drones provide the only solution when searching a large area such as Uwawa-Kyo Park – which is twenty times the size of a football stadium – in such a short time. A take up of UTM services is expected to boost the use of drones in cities.