Last year saw the announcement of the Unmanned Aerial Systems Integration Pilot Program (UASIPP), a project seeking to bring together regulators and industry players, allowing testing of a variety of different applications of drones. 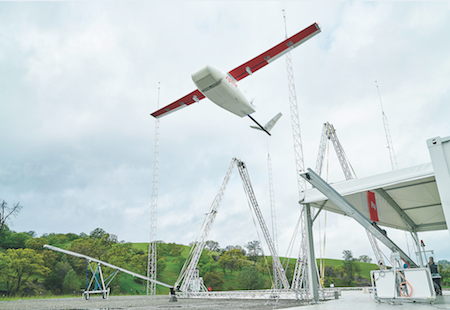 Generating a tremendous amount of interest, many governmental organs applied to take part as a Lead Applicant, and on 9th May, the awardees were announced. Originally only a maximum of five lead applicants were going to be selected, but because of the incredible response and flood of applications, ten partnerships have instead been appointed.

The IPP awardees represent various local, state, and tribal governments working within the programme to offer testing environments for applications of drone flights that are not covered by current rules, such as flying Beyond Visual Line of Sight (BVLoS) and night flying, which are likely to be crucial to expanding drone services. The awardees work with providers of unmanned technology to develop programmes that use drones for the benefit of the local communities and feed back the data to the Federal Aviation Administration (FAA), providing these non-federal level governments a voice in drone regulation.

The ten awardees in full are:

One of the main areas that looks to be benefitting heavily from the IPP is that of drone delivery. Half of the ten projects named involve drone-powered delivery in some form. Even though they were not directly selected – to some surprise – both Amazon and Google will be able to reap the rewards of seeing drone deliveries being tested live across the country.

San Diego’s project will focus on border protection and package delivery of food, while the Raleigh, North Carolina proposal will test localised package delivery systems, trialling flights over humans, BVLoS, and at night – all valuable data for working towards Unmanned Traffic Management (UTM) and a fully integrated airspace that is required to realise the potential of drone deliveries. Herndon VA will look to work with NASA, among others, to facilitate package delivery across both rural and urban settings, while Memphis-Shelby County Airport Authority, Memphis, TN will partner with FedEx to both test a UTM concept and further package delivery aims in an urban and airport setting, sure to provide a rich vein of data for many operations in the future.

Deliveries by drone have not had a huge amount of momentum in the US, with only a few trials such as 7-Elven in Nevada. After being very vocal about its plans to move into drone-based delivery services, Amazon has had to test overseas instead of in the US. No doubt it will be disappointed not to directly participate in the programme, but the retail giant will still be able to use the insights gathered from its rivals to further its own ambitions.

Medical deliveries are also a high priority in this area, with drones seen as being the key to providing faster response times for getting vital equipment or even blood to someone in need. There have been trials elsewhere in the world, such as Zipline’s work in Africa, as well as Swiss Post’s partnership with a hospital group in Lugano. Raleigh NC will work with Zipline to explore this potentially lifesaving area. It is little surprise that North Carolina was selected with the State’s Department of Transport previously working with Raleigh-based PrecisionHawk to develop a UTM system. Reno, NV is another proposal examining medical deliveries, seeking to use drones to delivery defibrillators in emergencies in both urban and rural settings.

While delivery appears to be the main “winner” of the UASIPP, the other drone projects selected are just as important to local communities and urban development. In the Choctaw Nation of Oklahoma’s proposal, with BVLoS and night flights over people designed to make agricultural, infrastructure, and public safety inspections. The awardee will work with CNN and the Green Valley Farms Living Laboratory and will invest in mobile ground-based detect radars and advanced weather infrastructure. The University of Alaska-Fairbanks, Fairbanks, AK will focus on pipeline inspection, testing out drones in harsh climatic conditions, unique to the area.

An interesting proposal is from Lee County Mosquito Control District, Ft. Myers, FL, which will focus on low-altitude aerial applications to monitor and control the mosquito population. It states that it will highlight the technological benefits of advanced ground-based detect and avoid radar systems, utilising infrared, satellite technology, and Automatic Dependent Surveillance-Broadcast (ADS-B). Given the number of diseases that mosquitoes can spread globally, this is an application the world will be keeping an eye on.

Overall, a broad spectrum of drone applications have been covered by the ten different proposals, providing a dynamic range of situations, from different communities and weather conditions, that will be able to demonstrate the power of drones and how best to further the sector.

Zipline is an automated logistics company based in California which designs and operates an autonomous system for delivering lifesaving medicine to the world’s most difficult to reach places. It has been conducting trials in Rwanda and Tanzania, as featured previously in the Robotics Law Journal, and is now bringing its delivery services to the United States through the UASIPP in North Carolina. At the announcement, Zipline’s CEO, Keller Rinaudo, said: “Today is an important first step towards bringing Zipline’s lifesaving drone delivery technology to the United States… We look forward to bringing this life-saving service to the United States in the coming months.”

A key priority of the program is integrating autonomous, beyond visual line of sight flights over populated areas into the FAA’s National Airspace System. The FAA is expected to enter into formal Memorandums of Agreement with applicants by May 7th, 2018. Zipline projects chosen as a part of this process are expected to commence operation by the close of 2018.

“Billions of people on earth lack access to critical medicine,” said Rinaudo. “In East Africa, Zipline’s drones bring people the medicine they need, when they need it in a way that reduces waste, cost and inventory while increasing access and saving lives. We’ve been hard at work to improve our technology and are ready to help save lives in America and around the world.”

In addition to plans to expand its service to the United States later this year, Zipline announced in August of 2017 plans to launch the world’s most extensive drone delivery service in Tanzania to provide emergency on-demand access to critical and life-saving medicines. Zipline and the government of Tanzania plan to use drone delivery for blood transfusion supplies, emergency vaccines, HIV medications, antimalarials, antibiotics, lab reagents, and basic surgical supplies.

The scale of the operation will be capable of making up to 2,000 life-saving deliveries per day to over one thousand health facilities, serving 10 million people across the country.

Zipline has even recently unveiled its latest drone, which it hopes will be able to boost its IPP operations. The new delivery vehicle is an autonomous fixed-wing style airplane. The plane is capable of flying at a top speed of 128 km/h, and a cruising speed of 101 km/h, making it the world’s fastest commercial delivery drone – 21 km/h faster than the previous generation of aircraft – and it has a round trip range of 160 kilometres carrying up to 1.75 kilos of cargo. The new plane is capable of flying four times faster than the average quadcopter drone and can serve an area 200 times as large.

“Our first generation aircraft and logistics system allowed us to create the first and only drone delivery service in the world, which is helping to save lives in Rwanda every day,” said Rinaudo. “We’ve taken everything Zipline has learned making thousands of life-critical deliveries and flying hundreds of thousands of kilometres and redesigned our entire system and operation from top to bottom. The new aircraft and distribution centre system we’re unveiling today will help Zipline scale to meet the needs of countries around the world – including the United States.”