According to the US Federal Aviation Administration’s (FAA) Aerospace Forecast Fiscal Report 2018-2038, air travel is in a strong place and will continue to grow over the next two decades. The report examines all of American aviation, including the emerging area of unmanned aviation, trends around the Unmanned Aerial Systems (UAS) sector and is targeted at both hobbyists and commercial operators. 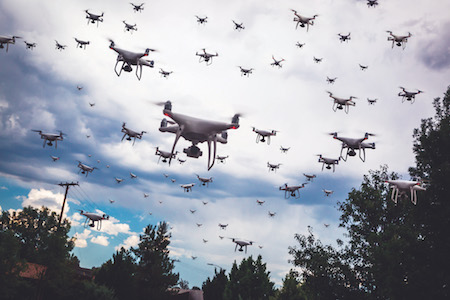 There has been some confusion over the registration rule after a judge forced its withdrawal – followed by President Trump reversing that decision and reinstating registration. Hence exact numbers of model or hobby drones are difficult to fully discern. As of May 2017 there were 772,000 drone owners registered with the FAA, but the data for the rest of the year is unlikely to accurately reflect the true numbers, as voluntary registrations were still accepted but not enforced. The lack of clarity over numbers is compounded by the fact that the registration rule requires the hobbyists to register themselves and not their devices – multiple drones can be included on a single registration.

Given those difficulties, the FAA used the figure of 873,000 registered hobbyists – as of 31 December 2017 – to project that there are approximately 1.1 million sUAS that are distinctly identified as model aircraft. Comparing previous data to the current set, there is an annual growth rate of 40%, a very substantial rate that has been facilitated by the interest around the introduction of drones as a hobby, combined with lowering prices and increasing levels of technology, such as built-in cameras. The FAA expects the model fleet to more than double in size over the next five years, with a conservative base estimate of 2.4 million and a high estimate of 3.17 million. This growth is expected to continue before dropping off to a more modest rate, in parallel with other consumer goods such as mobile phones and video games.

When examining commercial drone registrations, a clearer idea of the actual number of units emerges, as non-model owners have to register each drone separately. Since the launch of online registration there have been over 110,000 commercial operators registering their devices before the end of 2017. In contrast to the model aircraft, growth is expected to accelerate in this area over the next few years, while the clarity of Part 107 is praised for allowing waivers which can further develop growth as other commercial uses of drones can be explored. By 2022, it is predicted that the non-model fleet of drones in the US will double to over 405,000.

Among commercial drones, there are two varieties: consumer grade (below $10,000, average price of around $2,500) and professional grade (above $10,000, average price of around $25,000). Currently the consumer grade dominates the non-model sector with a market share close to 98%. By 2022, the FAA predicts that the consumer grades will still dominate the sector but its market share will drop below 90% as the market matures and the industry consolidates. Professional grade drones are expected to increase rapidly as further uses are explored, such as package delivery, and with the full roll out of the Low Altitude Authorisation and Notification Capability (LAANC), which will allow further flexibility of commercials uses of UAS.

One of the methods of measuring and forecasting non-model drones has been to examine the waiver applications that have been granted to non-model UAS operators. These are issued on a case-by-case basis to open up non-model UAS activities, and analysing these can help to indicate the direction that the market is heading. Non-model UAS are primarily used for aerial imaging and data collection, including real estate photography (48%), industrial and utility inspection (28%), and agricultural applications (17%), including crop inspection. State and local governments also use UAS for emergency service responses, accounting for 3% of the total of non-model UAS.

A final metric of unmanned aviation forecasts is Remote Pilot Certification (RPC). RPCs are issued in accordance with Part 107 and are used primarily to facilitate non-model sUAS flights for commercial activities. More than 73,000 RPCs have been issued, as of December 2017, with over 90% of the individuals passing the exam and obtaining their RPC. In line with the growth of non-model UAS, the number of RPCs is projected to experience similar growth, with non-model aircraft uses requiring over 300,000 remote pilots in the next five years, which can help employment opportunities at any businesses associated with UAS flights.