Dropping drones into the insurance sector

In 2015 a startup in LA started to make waves with its use of UAVs in the insurance world. DropIn has continued to make progress, with its network of Droperators (drone operators) ready to survey and make an appraisal with live video streaming, facilitated by a UAV, significantly cutting down the time and financial investment normally associated with making a claim. 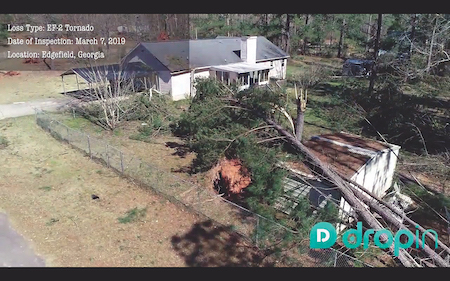 Recently, they released footage from the scenes of catastrophes, such as the wake of destruction from a tornado in Alabama, and a cyclone in Colorado, showcasing use cases of the DropIn system as they continue to grow. Tom Dent-Spargo caught up with DropIn’s CMO Jen Friel to talk about moving from the startup phase.

Moving out of the startup phase

DropIn seem to be determined to change the face of insurance through its system. They pride themselves on the speed with which they can despatch one of their Droperators to the site of a claim and their use of unmanned technology to augment the entire process. Recently, they have covered claims in catastrophe areas and have showcased the footage online, demonstrating the capabilities of their Droperators to act in severe situations and how they are able to provide help to those who need it.

DropIn really has moved out of the startup phase and has established itself firmly in the insurance world. Now a global solution operating in 56 different countries, a partnership with Lyft has also been announced. “We can actually provide an SLA (service licence agreement) that says we will have one of our Droperators available within 90 minutes to 96% of the population,” says Jen. “That’s typically with smartphones, not necessarily with drones but that’s what we can actually provide in terms of having eyes on the scene.”

DropIn relies on its extensive network of Droperators, which was apparently a relatively hassle-free experience to build. “It was perfect timing really with the gig economy, where people were looking for these types of positions, so the onboarding of the Droperators was, from the get-go, one of the easiest parts of starting with DropIn. But the difficulty with that is it’s a two-sided marketplace so the lifecycle or sales cycle with insurance companies has taken us years to develop and we’re still considered fast. It’s an archaic industry by definition. Even the fact that we’ve been able to get as far as we have has been pretty remarkable.” Very much a disruptor in an old system. “Exactly. We’re an approved Lloyds vendor now so we’re truly getting into the processing and being part of that solution.

“Overall, it’s been remarkable to move out of the startup phase because we’ve gone to some of these locations and are able to have people there literally within 24 hours or in most cases within 90 minutes and to see how these claims can be processed so effectively and efficiently.”

Helping out at catastrophes

“You can see how we’re able to really get in there and provide a super solid view before a lot of people – an adjustor – could even get there,” says Friel.  “Before, we’ve been able to say that, listen this is the technology that we have. Now we have clients onboard, we’re able to showcase more [with these videos].”

One of the catastrophe sites is in Edgefield, Georgia, where an EF-2 tornado struck. The extent of the damage is obvious, with an enormous tree fallen onto an outhouse, while others are swept clear of leaves if not outright ripped from the ground. The whole area looks almost bare in the wake of the tornado. Another is of a landslide in Roanoke, Virginia, which has taken a tree along with it as it falls onto the back gardens of a property. In both these videos, the footage is captured from many different angles and heights, a comprehensive view of the damage which will be used to help assess an insurance claim.

“These were all commissioned by specific insurance carriers. We were able to get a Droperator there in less than 24 hours and the photos and videos are immediately available to be downloaded so we can do measurements and everything included, so we can effectively process the claim that quickly.

“Previously it would have cost hundreds of dollars and take weeks if not months to have an adjustor, especially for something like catastrophe claims where  you have such a saturated area that’s been affected. What’s been really cool with getting out of the startup phase is seeing this being put to use. We also have a satellite so that, when we’re able to go to someone’s location, we are actually able to have the family members use our cell service, using a cat phone, to connect with lost family members. That’s something where we happened to have the technology and we’ve been able to use it for these purposes.”

Essentially it’s a version of Facebook’s I’m safe function that flags up during disasters, whether natural or human, but one that gives you direct contact and the reassurance that that provides. It’s not hard to see the value in such a capability. “You need cell service to be able to do that [going on Facebook etc.], and sometimes, such as in the case of the Malibu fires, getting cell service took forever. And that’s in a place where it could get back pretty quickly, given the wealth of the city, which goes to show you how some of these other places could be left stranded even longer.

“We’re here anyway to help these insurance companies process these claims, but again with this technology we see so much of the bigger picture in terms of having access and being able to help these people. It also helps the insurance carrier because, at the end of the day, they have a higher customer retention rate because people are satisfied with the fact that, particularly in terms of catastrophes, this is an epic time of need and to have an insurance carrier actually be there for you is remarkable.”

On dealing with the Federal Aviation Administration (FAA) and regulatory bodies around the world, Jen says, “All our pilots are licensed and we follow all the rules in terms of that.” And on dealing with law enforcement agents at damage sites: “In terms of catastrophes specifically, it’s been rather interesting we’ve only had one Droperator get kicked out of a location (due more to the attitude of that particular Droperator than anything else!) but other than that, people are just happy to help us on the way.”

In previous natural disasters, there has been a proliferation of amateur drone operators flying their devices into danger zones, to the point where very strict no-flying zones were laid down so that the emergency services could operate without distraction. So far Dropin hasn’t had any trouble from amateurs, nor have they been told to wait as they ensure the safety before flying in. “We’ve been lucky in the sense that, we really do take into consideration the safety of all drone operators and the situation in general. Pretty much once it’s safe to pass that’s when we get more involved. And that’s depending on each situation. We don’t want either party putting themselves in danger just so that an insurance claim can be processed faster, that seems a little nutty.”

“We’re interested in scaling, in growing things out in terms of we’ve got our tech built, we have the product, we’ve been around for a little bit now so we have the credibility and we’re not going anywhere, so now it’s just scaling.”

For more videos of DropIn Inc.'s drone footage, check out their Vimeo.

[Originally published in Issue 4 Volume 5 of the Robotics Law Journal, this article claimed that the percentage of the population DropIn can provide an SLA to in 90 minutes was 60%. This has been amended to 96%.]