A look at Wuhu National Industrial Robotics Park, at the centre of China's robotics industry. 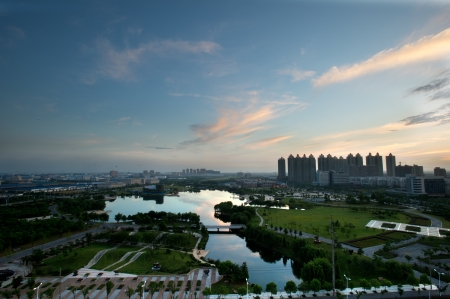 The robotics industry in China is escalating as part of the country’s effort to realise the comprehensive upgrade of  the tech industry as laid out in the Made In China 2025 plan. It will address some of the current problems of labour shortage and the cost of labour, which is prohibitive at present. The effects of the upgrade can already be seen with predictions for the number of  robots used in production in 2017 going as high as 428,000 for China, compared to 292,000 for North America1.

Wuhu National Industrial Robotics Park, located in Wuhu city in the Anhui province, is one of  the country’s largest centres for robotics. There are currently 62 robotic enterprises settled there and the total output has reached more than 1 billion USD. Robot Units production covers 25 of  those enterprises (15 focussing on industrial robots, 10 on service robots), and system integration covers 24 enterprises. The remaining companies cover areas like core components, Wuhu’s research institute and a rental platform.

Wuhu owes a lot of its success to its location. Situated at the centre of China’s manufacturing industry, it is surrounded by the three most developed regions, which are the Yangtze River Delta, the Pearl River Delta, and the Beijing and Tianjin area. A four-hour drive from Wuhu can bring you to one of over sixty large- or middle-sized cities, covering a total population of over 500 million — roughly half the population of the entire country. Because of this, Wuhu gains a lot of direct support from the central government for all of its industries, particularly robotics and automation.

This manifests in some of the financial benefits that prospective Wuhu business can receive. A maximum of $3 million grant can be awarded to a company settling in Wuhu from overseas. In terms of policy support, an enterprise industry application can receive a cash subsidy of $800k. The government will also arrange sale subsidies to the enterprise in sales promotion with 10% (base on the sale price) for each robot, at the trade fairs that are set up by the Wuhu Park organisers.

These trade shows are of great significance in China. President Xi and Premier Li both addressed the 2015 World Robot Conference, President Xi communicated with a robot at the company iFLYTEK, and Premier Li visited Baidu company. These high-profile appearances show just how strong the central governmental support is for improving the robotics industry and why Wuhu is so successful.

The attempt to localise production of core components and robotic units is ultimately to address the issues and challenges of  the current state of the industry in China. One example of this is the current deployment ratio of industrial robots is only 32 robots to 10,000 human workers (below the global average of 62 : 10,000)2. The current low market size, as compared to the employee pool, represents a hitherto untapped potential for a huge growth potential in China and increasing the sheer numbers of units produced by 2025 is a method for increasing the deployment ratio and to compete internationally.

Wuhu also has 22 universities and vocational colleges with around 200,000 students, providing the human resources for the local enterprises and establishing Wuhu as a centre for research and development. Future innovation is also covered by the HIT Wuhu Robot Technology Research Institute (HWRTRI) founded by both Wuhu city government and Harbin Institute of Technology (HIT). Collaboration with top US universities is also on the horizon, following on from the success of the research institute.