The Journal of Engineering and Technology Management has conducted research into attitudes of driverless cars in a closed environment, analysing the underlying factors affecting trust in driverless cars. The technology is seen as being a huge disruptor in the next technology revolution but a lack of trust is a principal barrier to its wide-scale adoption. 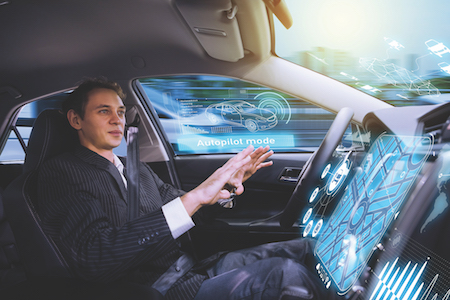 Specific concerns centre around performance expectancy, reliability, security, privacy, and trust in the car’s ability, with guarantees sure to have a positive impact and help to generate trust; conversely a failure to deliver these points will have a negative impact. Even though the statistics are constantly bandied about claiming that driverless cars will be much safer than human drivers, full trust in the technology still remains low, due to the publicity any incidents involving driverless cars receive.

The lack of human control also removes an easier portion of blame in these incidents – an issue robotics and AI is facing in all arenas – as it will be blamed on the technology as a whole, rather than just an irresponsible individual. This has an negative impact on adoption. This means that the highlighted risk areas are key for automakers to focus on, guarantee and deliver to build up trust from the consumer.

The respondents in the research were staff at Flinders University and students based in Tonsley in Adelaide, Australia. Flinders University was chosen because it will soon be introducing driverless cars. It is currently going through the legal processes to bring the vehicles onto the road, with the service providing rides for staff and students to and from bus and train stations and the campus. A closed testing environment such as this was selected because early adoption of driverless cars will be in these environments, other examples being airports, holiday parks, retirement villages and so on. This ultimately means that the study is limited in addressing the public attitude towards driverless cars in a mass consumer market – in full-fledged public transport – but it is an important first step in addressing the issue of consumer trust in the new technology.

A questionnaire was sent to the respondents asking ten questions about their preferences for driverless car adoption in different scenarios. This format was chosen to be quantifiable and replicable. Testing was then performed on the hypotheses that were generated over which factors would positively influence driverless car adoption.

Given that autonomous vehicle technology has not yet been fully developed, performance is difficult to accurately predict. Expectancy over the performance is therefore likely to be a significant factor affecting people’s trust and willingness to adopt the technology. The research hypothesises that performance expectancy will positively influence the adoption of driverless cars. Current tests of autonomous vehicles are demonstrating that they are likely to have improved performance over their non-autonomous counterparts, with high-profile tests over thousands of miles. While there have been incidents catching the public eye, they are still few in number, but it is these accidents that are the most likely to negatively influence adoption, as they lower the perceived safety record of autonomous vehicles. Research that reinforces the overall statistics that prove that overall they outperform non-autonomous vehicles in their safety record is required to ensure that performance expectancy remains high.

Similar to performance expectancy, reliability of autonomous vehicles is demonstrated through the extensive tests on the road. One of the more notable public demonstrations was Google’s driving project gave a ride to a blind man in 2012. The reliability of driverless cars rests mostly in the limitations of the technology and computing power that they carry, which is only going to improve as time goes on, showcased in the live tests. Questions do remain over autonomous vehicles’ abilities to deal with unexpected events, such as Uber’s incident with a pedestrian appearing in the street out of the dark and its failure to avoid the collision.

Security concerns over driverless cars range over vulnerabilities software-based attacks such as remote access viral malware, as well as physical vulnerabilities such as traffic mishaps, broken equipment, or car-jacking. Proving that driverless cars have high levels of security will have a positive influence on their uptake. Developing critical security systems is therefore a priority for the makers of these vehicles, while large-scale infrastructure needs to be protected to ensure that security can have this positive impact.

The term “Autonomous Vehicles” itself explicitly projects the idea of removing autonomy away from humans, relinquishing control. Tied up with the loss of autonomy is a loss of privacy. Autonomous vehicles have the capability of transmitting the location and travel patterns of the owner or other passengers, which opens the door to targeted marketing, law enforcement, and surveillance. Route planning that is undertaken by the vehicles also reduces human autonomy and compromises privacy in terms of the route they take, while the Vehicle-To-Vehicle technology runs on communication between vehicles to navigate and avoid safety hazards can compromise privacy by controlling the wireless communication with other cars. Privacy protection needs to be built into the designs of autonomous vehicles to ensure that automakers can guarantee that users’ data will be protected and allow for higher adoptions rates.

It can be almost dehumanising to surrender control over to the autonomous vehicle, trusting that it will be able to drive you safely to your destination. Trust is the willingness to place oneself into a vulnerable situation, hoping for a positive outcome and positive future behaviour. In order to generate trust in driverless cars, automakers need to address three different areas: that they can provide the ability to deliver on safe and secure systems; to deliver that service with integrity; and to act with benevolence on behalf of the customers’ best interests. Given the roadblock that is involved in relinquishing all control over to technology, this is one of the most important areas to focus on if driverless cars are to undergo mass adoption.

Through 101 replies from the questionnaire followed by data analysis of the responses, it was found that the hypotheses were proved correct, that if automakers can guarantee these five areas, they will have a positive influence on people’s decisions to adopt driverless cars. It also shows that these are the areas that need to be addressed in order to allow for the swift introduction and integration of driverless cars. The study has a direct insight for the promotion over trialling driverless cars in a closed environment, due to the demographics of the respondents considering the upcoming tests in Tonsley and Flinders University. For example, the interaction between the cars and pedestrians or cyclists was seen as particularly concerning, one that needs to be addressed, so promotional managers should therefore highlight how the technology will be able to deal with those situations and to stress the presence of the human driver that can take over if necessary.

The limitations of this research centre mainly on the fact that it is so focussed on a closed system rather than driverless cars out in major cities, but it does give a strong picture for how to introduce closed autonomous vehicle systems such as shuttle rides in an airport or university campus. Further research needs to be undertaken in this area to examine more open systems, as well as going into further depth in other closed systems and their specific issues. A prime example of this would be how cybersecurity of the vehicles will be of much greater importance in an airport than a university.

Demographics also need to be widened. It has been stated that disabled and elderly people will benefit most from the driverless revolution and likely to be prime among the early adopters of the technology, yet there has still been very little research done to survey their attitudes towards driverless cars. If the proposal in California goes through and a new driverless taxi programme goes into effect, the mandate that the companies providing the rides specifically note how many rides for disabled passengers were fulfilled will provide invaluable data in this area to help make sure that the technology works the best for these early adopters.