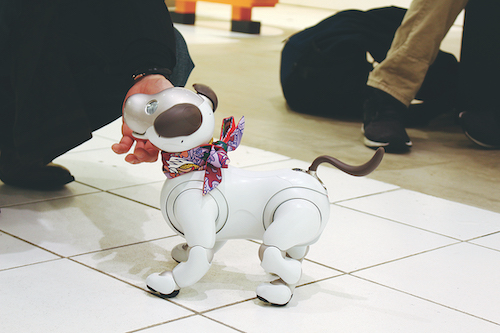 Aibo's technology includes artificial intelligence, sensors and microphones that help it interact with people, and cameras that can recognize faces and help it navigate your home like a Roomba.

Specifically, the Sony privacy policy for Aibo states: “We may collect Usage Information through the Aibo Product, including information about the device itself and information the Aibo Product collects through its microphone and camera (to assist your interactions with Aibo) such as data on voice commands the Aibo Product receives and how it interprets and responds to those commands (including both the content of the command and the tone/manner in which it is delivered)...”

Aibo does not record audio of user commands, but it does send Sony information about the content of those commands, as well as the information on the way it interprets your tone. Aibo uses its onboard microphones to hear commands, and Aibo processes that microphone data itself using its built-in quad-core CPU. Aibo includes two built-in cameras with an upward facing camera above its tail that helps it map your home, and a camera on its nose that can remember and recognize up to 100 individual faces. The camera on Aibo's nose helps with navigation, as well, but its main purpose is to help Aibo interact with people.

The facial recognition functionality is based on the sensing and measurement of facial features, and by detecting specific expressions, including smiles. “Aibo also learns its surroundings by sensing and measuring elements of its physical environment, as well as its proximity to those elements," Sony says. "This data, which is stored both locally on Aibo and in the cloud, is intended to support and enhance Aibo's functionality, help Aibo find its charging station, as well as to protect Aibo from collisions with household objects.” A final feature of note is Aibo Patrol, allowing the dog to retain a log of its interactions with each face it recognizes.

It is this feature which Sony says that, “due to state regulations and policies, the Aibo robotic companion is not for sale or use in Illinois,” where the collection of biometric data, including face scans, is regulated by the Biometric Information Privacy Act (BIPA), which regulates the collection of biometric data, including face scans. Aibo’s facial-recognition data may constitute such "biometric information", thus falling foul of the Illinois law which places specific obligations on parties collecting biometric information. Thus, authorities decided to prohibit purchase and use of Aibo by residents of Illinois.

The last issue to note in relation to the fusion of AI with robotics is the role of emotion. Sony claims “Aibo learns its environment and develops relationships with people.”  Dogs are known as a human’s best friend, and there has been a proliferation in the use of ‘care dogs’ for people with mental health issues and in the aftermath of trauma. Aibo is arguably a step beyond a purely utilitarian or amusing robot, it moves us towards friendship and support. Making Aibo meaningful to users suggests that extended service contract might be in order, which Sony has not as yet offered. The new Aibo launched in 2018, with a premium package, has warranty which expires in 2021. People expect their real dogs to be around for them a lot longer than that.