As it stands, when an individual suffers an injury following a collision with, or in, a vehicle, as a result of a driver’s negligence, that individual is entitled to make a claim for compensation against that driver’s insurance company. 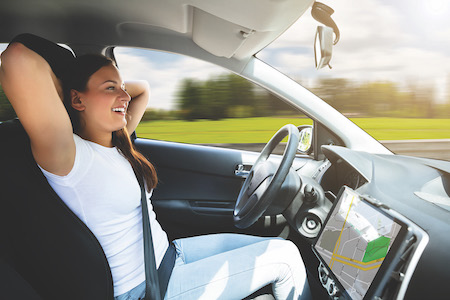 Automated vehicle technology is developing rapidly and despite some public concern, driverless cars are expected to improve road safety by eliminating the cause of the vast majority of road traffic collisions – human error. In the meantime, the questions above still require answers so that when collisions involving autonomous vehicles do inevitably occur, victims are able to access compensation for their injuries and financial losses without undue delay or complexity.

Research undertaken has shown public perception of autonomous vehicle technology remains sceptical. The problem of trust has deepened still following reports out of the USA of the first fatal accident involving a pedestrian, during a trial of an autonomous vehicle in March 2018.

Clearly then, those involved in this burgeoning industry face an enormous challenge in reassuring those unnerved by the idea of semi and fully autonomous vehicles on our roads. Failure to do so will surely see autonomous vehicles join the scrap heap of failed transport modernisation projects.

Where are we now?

It is important to understand that there are several recognised levels of vehicle automation. The technology will not proceed from “no automation” to “full automation” in one fell swoop. We are at the beginning of a journey towards fully driverless cars and at present the human driver remains fully responsible for monitoring the driving environment and for regaining full control when required.

There is plenty of confusion on this point which fuels uncertainty and increases the risk of accidents. Manufacturers have so far failed to educate users that they remain responsible and not to overestimate the current state of the technology. Fatalities involving semi-autonomous vehicles have already occurred where drivers have failed to heed warnings to take back control.

The role of legislation

One of the biggest factors in the safe adoption of the technology is ensuring our laws and insurance framework keeps pace. At the same time, over-regulation risks stifling innovation.

As Secretary of State for Transport Chris Grayling recognised in November 2017 “As things stand, [drivers] may not be covered for collisions caused by autonomous vehicles, because only the driver’s use of the vehicle is insured.

Victims might have to take vehicle manufacturers to Court, which would be time consuming and expensive, undermining the quick and easy access to compensation that is a cornerstone of our insurance system”.

The Government’s intention is that the UK becomes a leader in autonomous vehicle technology. To achieve this, the questions about who is liable when things go wrong need answering. This will encourage manufacturers to innovate and exploit economically lucrative market opportunities.

Our current insurance law is driver-centric; meaning all human drivers have to have insurance for personal injury or property damage caused due to a driving related accident. Third party insurance is the legal minimum which protects a driver against damage caused by you to others. This is required by the Road Traffic Act 1988. Our Highway Code is also predicated on continuous human control of driving and liability for road traffic accidents is also based entirely on human drivers.

Accordingly, in the event an accident occurs where it can be legitimately said to have been caused or contributed to by a failure of the vehicle’s technology rather than a human driver’s actions, our existing law and insurance system leaves those injured potentially without recourse. Change is therefore needed.

The Automated and Electric Vehicles Bill was presented to Parliament by the Government in October 2017. During its second reading in the Commons it was emphasised that the intention of the Bill was to extend compulsory motor insurance to include autonomous vehicles. In doing so, this ensures consumers can buy insurance in the same way as they do now, preserving the ability of claimants to obtain compensation quickly and fairly within the existing framework rather than having to pursue manufacturers via a product liability claim.

In turn, motor insurers will have a right of recovery from the manufacturer where the vehicle’s technology is at fault. A complicated factor here will be attributing responsibility for technological failures given the complexity of an automated vehicle’s supply chain.

What remains less clear is where an accident involves a semi-autonomous vehicle – a scenario that will certainly exist for several years to come. For example, where a driver fails to assume control of the vehicle in an emergency situation or where the autonomous function fails to operate correctly, determining the appropriate apportionment of liability will be difficult. It may well be that more incremental changes are required to our legislative and insurance framework to account for the interim period of advanced driver assistance systems before we enter the exciting world of full automation.

The law has an important role to play in ensuring the public stay protected when accidents inevitably occur involving semi and fully automated vehicles.

If driverless technology can prove itself in time as being a far safer, cleaner option while answering many of the legitimate concerns outside of this piece, I say let’s hear it out.

By Josh Hughes, Associate and Head of Complex Injury at Bolt Burdon Kemp