Nesta’s Challenge Prize Centre, in partnership with Innovate UK, has released its findings from the first phase of the Flying High programme, outlining the opportunities and challenges for implementing drone technology in UK cities. 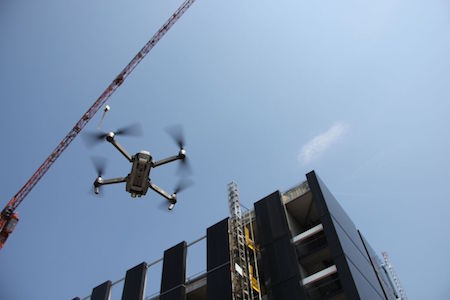 The Flying High team worked closely with these different stakeholders to explore the current state and future ambitions for drones in urban environments in the UK. In partnership with the Flying High cities, five socially beneficial use cases were analysed to investigate their technical, social and economic implications. These are:

The key findings from this phase of Flying High, which featured a number of work streams including public impact analysis, systems research, industry mapping and key stakeholder engagement, are outlined below:

Drones can bring benefits to UK cities – cities are excited about the possibilities that drones can bring, particularly in terms of critical public services, but are also wary of tech-led buzz that can gloss over concerns of privacy, safety and nuisance. Cities want to seize the opportunity behind drones but do it in a way that responds to what their citizens demand.

“We want to harness the massive potential of technology in the NHS to deliver improved patient care and the use of drones offers exciting possibilities.

“As the NHS develops its long term plan we will be looking at the use of technology now, tomorrow and into the future to ensure we can take advantage of all the benefits new innovations can bring.”
Deputy Chief Fire Officer Dave Walton from West Yorkshire Fire & Rescue Service said:

“This project is about exploring possibilities and being forward thinking and we are pleased to have been asked to be a part of such innovative work. We already use drone technology at certain types of fires to give our Incident Commanders an aerial view of the extent of a fire or its exact positioning within a large building. Indeed, a drone has recently been used at moorland fires for exactly this purpose and this can greatly assist in decision making of how to best tackle a blaze.

“However, these trials look beyond this capability to see whether drones could assist the Fire Service even further – potentially even getting to a fire before fire crews are able to by road to live stream visuals back which would enable us to start planning our tactical response.

“Having this information would put our firefighters a step ahead and ultimately could save time which is of the essence when dealing with any emergency.

“It’s an exciting concept and whilst we can’t predict the future it’s prudent to be open minded to the possibilities. If we look back in time 50 years, firefighting equipment has evolved substantially, probably beyond what was thought imaginable at that time.”

Public confidence is key – thanks to Flying High, cities are starting to think about what drones should and should not do, but so far the general public has played very little role. There is support for the use of drones for public benefit such as for the emergency services. In the first instance, the focus on drone development should be on publicly beneficial use cases.

There are technical and regulatory challenges to scale – the five cities examined a wide array of tasks that drones can perform. In complex environments, flight beyond the operator’s visual line of sight, autonomy and precision flight are key, as is the development of an unmanned traffic management (UTM) system to safely manage airspace. In isolation these are close to being solved - but making these work at large scale in a complex urban environment is not. While there is demand for all of the use cases that were investigated, the economics of the different use cases vary: some bring clear cost savings; others bring broader social benefits. Alongside technological development, regulation needs to evolve to allow these use cases to operate. And infrastructure like communications networks and UTM systems will need to be built.

A vision for the future – there is growing alignment between the key stakeholders - government, industry, regulators - on what the future of drones should look like in the UK. Prior to the Flying High project beginning, there was surprisingly little coordination between key players, and cities were largely absent from the discussion. This momentum needs to be kept up - and the public urgently need to be brought into discussions about the future of drones.

“The five city projects under the Flying High Challenge are all excellent examples of the potential for drone technology to make a real difference to our everyday lives. This important report clearly sets out the challenges involved in delivering the vision for drone utilisation in city landscapes, and also points out the huge potential for UK companies and organisations to seize these exciting opportunities.”
Through industry mapping, engagement with national stakeholders and work with the five Flying High cities, there is clear evidence that drones are an opportunity for the UK- hundreds of companies already operate in the sector and can benefit from new business, UK universities have research strengths in the area and public authorities can save money or provide new and better services thanks to drones.

However, the project has also identified a potential threat: UK policy responses to drones are behind those of leading countries. The US, EU and Singapore in particular, have taken bigger steps towards reforming regulations, creating testbeds and supporting businesses with innovative ideas.

“The Flying High project is a fantastic example of how much drones can help us in our daily lives.

“Drones have the potential to bring great social and economic benefits to the country and we want the UK to be a global leader in drone services.

“We have begun introducing a world class legal framework to ensure this exciting technology is used safely and responsibly to help the industry thrive.”
The key recommendation of this report is to organise major challenge prizes related to the five use cases that have been investigated. This process would drive innovation in the key technical barriers to drone development, while forming the core of a continued programme of public and political engagement. Brought together, this will allow the UK to position itself to take the lead in the development of drone technology, and therefore in the economic benefits- according to recent research from PwC, drone technology has the potential to increase UK GDP by £42 billion (or 2%) by 2030.

In addition to the challenge prizes, the report recommends that regulation be updated to reflect advances in drone technology, particularly around management of urban airspace; and investment in the infrastructure that drones will need if they are ever to operate at large scale.

“The first step in Flying High has been to better understand what drones’ place in our skies might be, to find out what challenges lie in store, to assess the benefits to cities and the people who live in them, and to start a much-needed conversation to build a shared view of this future.

“What should come next is a plan that takes the vision of cities, public services and citizens and frames them as challenges to be actively solved.”