The head of Dubai’s Roads and Transportation Agency has announced that a drone capable of carrying people will begin regular operations from July. 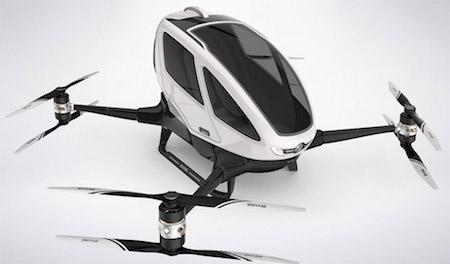 The announcement was made at the World Government Summit and the UAV used will be the Chinese Model eHang 184. It has already had test flights, reporting speeds of up to 160 kilometres per hour, and a total distance of 50km on a single battery charge.

It can carry one passenger of a weight up to 100kg with a flight time of 30 minutes. Only one control is located inside the drone, a touch screen for the passenger to select their destination. It is then controlled by an auto-pilot from a command centre.

Fears over safety have been raised, as is often the case with UAV technology, and Dr Steve Wright of the University of the West of England would like to see at least a thousand hours of test flights before seeing a human ride it.

Elsewhere, the device was also approved for testing in Nevada in June 2016. Last month Israeli firm Urban Aeronautics announced that its Cormorant passenger drone, costing £11m and primarily designed for military use, could be in use by 2020, and has the capacity to carry 500kg, travelling at 185 kilometres per hours.