A review of Drone regulation in Brazil by Nicole Cunha, a partner at Basch & Rameh Advogados Associados in Rio de Janeiro. 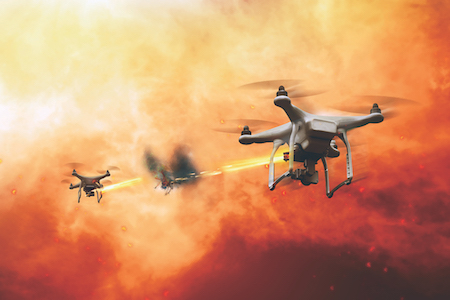 The purpose of this article is to show the development of Brazilian laws in respect of Unmanned Aerial Vehicles also known in Brazil as VANTs (Veículos Aéreos Não Tripulados) and informally called “drones”. The Brazilian National Civil Aviation Authority (ANAC) has been developing local regulation over the past few years following guided instructions from the International Organization of Civil Aviation – ICAO. In 2012, ANAC published the Supplement Normative 21-002 (IS 21-002) establishing the procedures for the issuance of certificates for experimental flights (known as CAVE) for VANT with the purpose of research and development, crew training and market research. Currently, more detailed regulation is being prepared by ANAC through the RBAC-E 94.

In Brazil VANT is legally defined as an “aircraft designed to operate with a remote pilot and which is not used for purely recreation”. Such definition includes all airplanes, helicopters and airships excluding traditional balloons and aeromodels. A Remotely-Piloted Aircraft – RPA is a subcategory of a VANT and is an aircraft where a pilot is not on board (remotely piloted) although intervening at all times during the flight. Conversely, aeromodels are unmanned aircraft for recreation only and are not authorized in Brazil. Brazil ratified the Chicago Convention, article 8 of which prohibits self-operated aircraft; consequently, they are not authorized by ANAC. Only certification over RPA has been authorized in Brazil. Although the Brazilian Aeronautical Code (CBA) does not expressly refer to unmanned aerial vehicles the definition given to aircraft encompasses them. The CBA defines aircraft as, “any equipment maneuverable in flight which can be self-sustained and which is able to circulate in the air space through aerodynamic reactions able to carry people or things.”

The specific features of a VANT demands a joined-up approach from ANAC and other authorities in Brazil. ANAC together with the DECEA (Brazilian Department of Airspace Control), ANATEL (National Agency of Telecommunication) and the Brazilian Federal Revenue Secretariat have been working to improve legislation over VANTs. Therefore, general regulation ruling aircraft in the CBA, rules issued by ANAC and DECEA, as well as civil and criminal laws in Brazil apply to VANT. ANATEL regulates radiofrequencies for operation of Remotely-Piloted Aircraft System – RPAS. RPAs are subject to registration identification, reservation marks, maintenance and inspection programs and insurance coverage against third party accidents following the same procedures for normal aircraft with the necessary exceptions due to the reduced dimensions of an RPA.

A CAVE is required for a RPA flying 400 ft above ground level (AGL) or above the visual line of sight even if under this altitude. It is also required for an RPA with maximum take-off weight above 25 kg even if operated in visual line of sight and under 400 ft AGL. A CAVE does not authorize operation of aircraft for commercial purposes. The IS 21-0002 also permits the operation of RPA with maximum take-off weight equal or below 25 kg operating on 400 ft or less above the land surface, in visual line of sight through a specific permission granted case by case. Concerned with accidents involving third parties on the ground, ANAC has prohibited RPAs in urban areas unless with a specific authorization granted by ANAC. ANAC has authorised RPAs for private use by individuals or corporate activities such as, agricultural activities, maintenance electricity, pharmaceutical use and aerial photography. Military Forces in Brazil has been using drones for Amazon Forest Control. ANAC has not issued any normative for commercial use of VANT until now.

ANAC has been working to collate the rules for VANT in one single regulation trying to compress requirements from different authorities. Last year ANAC coordinated a public audience to exchange suggestions to the draft regulation resulting in the RBAC-E 94. The main contents of the RBAC-E 94 ca be summarised as follows:

ANAC has been working hard and collaborating with other authorities in Brazil and abroad. The VANT sector has a very promising market. We expect that RBAC-E 94 to be published shortly which will clarify the legal requirements for operation of the different types of VANT.