New rules governing drones in the UK were introduced this year as part of an attempt to create a background of safe operations of drones in a growing market. As new rules take effect, with safety liability concerns at the forefront, new demand for drone insurance has also emerged. 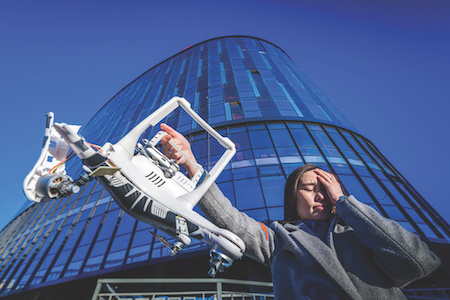 What does the new legislation involve?

On 30 May 2018 the Government introduced its new drone legislation through an amendment to the Air Navigation Order 2016. Some of the key changes include:

What is the reason for the new legislation?

The aim of the legislation is to create a safer landscape for the use of drones as the sector grows. PWC estimates that the drone industry could add £42 billion (or 2%) to the UK’s GDP by 2030, by which time over 76,000 drones will be in use in UK skies. The increasing popularity of drones, both commercially and for entertainment, has led to the need for a clearer regulatory framework and safety measures to protect planes, helicopters, other aircraft and passengers from any potential dangers. According to the UK Government, there has been a year on year increase in the number of reported incidents involving drones, reaching a total of 93 in 2017. Damage from foreign objects, including drones, is an issue for the aviation sector, and generates costly claims.

What impact does this have on the insurance market?

In this context, it is perhaps not surprising that there is an increasing market for drone related insurance. In the UK and across Europe, any commercial drone – regardless of weight or size – must have third party liability insurance. Smaller drones that are not used for commercial operation do not have to carry insurance. Even a relatively small and light drone has the potential to cause significant damage to property and people, though, and these risks are unlikely to be covered under typical home insurance policies.

Clearly the growing use of drones in an increasing variety of contexts will bring with it a wider range of risks. For example, it is expected that insurers themselves will seek to deploy drones for the investigation of claims, and AIG in the US has already been permitted to do so. Insurers should monitor the developments in the drones industry closely and be ready to respond to the changing risks and opportunities.

What opportunities does this create for the insurance market?

A clearer regulatory environment should help to reduce the number of incidents involving drones. It should also enable drone operators and others to better understand, assess and provide for the risks that the growing use of drones will generate.

There is an opportunity here for insurers. Comprehensive, and potentially complex, drone specific policies will be required. These policies will need to provide cover for a range of first party and third party losses, such as damage to property or persons, potential data / privacy infringements, and cyber-attacks. Insurers who are prepared to take advantage of this opportunity will be among those to benefit from the new drone-powered economy.