According to South Africa based enterprise-grade drone manufacturer, drones will soon be seen regularly flying over borders= zones, crime hot spots, and city streets, as public safety agencies discover the potential cost-saving benefits and efficiency boosting nature offered by the eye in the sky. The increasing proliferation of UAVs utilised by public services alongside the rise in the consumer drones illustrates the complex structure of the drone market and how it is evolving. 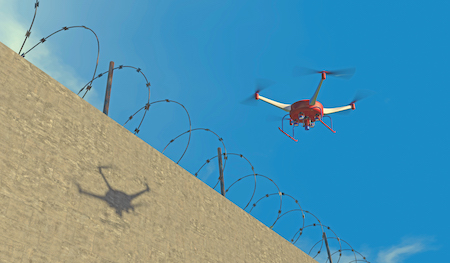 Gideon Gerber of Airborne Drones was speaking to Tom Dent-Spargo.

Structure of the Drone Market

Drones were initially only used in a military context and were very expensive. Then, with the consumerization of the various component technologies via the mass adoption of these in mobile technologies like cellphones, drones have become much more accessible for everyday use. Initially this was manifested mainly in the RC type hobbyist market but eventually three distinct markets evolved from there:

The first two markets have since begun to merge into a Prosumer market at the high end. Certain Prosumer players, like DJI, signalled intentions to try and move into the (more lucrative) Commercial market with higher endurance drones and partnerships with software platform providers like 3DR.

Drones will inevitably become part of everyday life. At a personal level they will become an accessory like a wrist watch or a cellphone (and maybe replace one, or both). At a commercial level we are facing a technology wave that will change the way business is conducted.

Our business model has been set up to service the Commercial Market. Being able to understand customer requirements and produce a bespoke solution for the needs of the business market is how we have positioned ourselves. The consumer market is well spoken for by well established brands. We have certain well developed competencies in architecting the overall UAV solution where we have developed some unique designs of our own.

Where Can Drones Be Best Utilised?

The Main Vertical Industries where UAVs are currently exploited are:

There is an interesting case study of how drones can be used to combat the deforestation that is linked with the production of palm oil. There is a labour shortage in the process of surveying the trees. Because replanting is not falling in line with consumption, and there are concerns over the health of the plants and the forests as a whole, surveying and monitoring is extremely necessary, but it takes twenty people up to a month to conduct a survey of a hundred samples in a hectare. Trying to manually find the 4% of disease ridden and 8% of ageing trees among the 675 million presents some obvious logistical issues.

Instead, UAVs can provide a more efficient solution. Using sensors on an Airborne Platform, such as Airborne Drones Sentinel UAV such as multispectral, infrared and thermal offer the possibility to research such aspects as plant health, offering possibilities for highly targeted responses to disease and growth variations, including the capturing and geo-tagging of high resolution images. The technology can be relied upon to ease the pressures on the human workforce.

Drones are typically deployed in situations which are described as Dull, Dirty or Dangerous. Or requires additional Reach, and/or Data. They do this more reliably than humans, and more cheaply than the closest competing airborne technology, which is helicopters. Today drones are already extensively used effectively in remote situations or over long distances, and for this border patrol is a prime example. So also is pipeline/transmission line monitoring. And as you can see from our various blogposts, UAVs are used in a wide variety of industries and instances.

From a legal perspective the advent of drones, as with the advent of internet, creates a layer of remoteness in terms of individual accountability and culpability. A weaponised drone is unable to argue self-defence for example!

Most of the legal consequences that are associated with the implementation of AI (Artificial Intelligence) will also affect the Drone market. UAVs are but a platform for the extension of certain types functionality (which includes AI) that add value to the daily lives of people and businesses. Not only will it deliver AI, but it will also use AI to improve its own functioning. AI is likened to previously, when electricity was added to operational processes to improve it, today AI will be added to operations, to improve efficacy.

Drones (UAVs) are a major extension of the Range and Reach, and Dimension (height) of the human condition both personally and at an enterprise level. The challenge will be how we integrate them into the “intermediate space” between where we can currently reach terrestrially (and physically), or with long haul non-terrestrial logistical infrastructure like, airplanes, satellites, etc. The frameworks for these are currently being developed, both the regulatory frameworks to govern these unmanned aircraft skies, as well as the software to manage drone traffic.

A new term that is being bandied about is Dronomy: the new economics that arise from the pervasive deployment of drones. Drones, along with AI, will create another level of pliable, responsive infrastructure layer that we exist within. Intelligent articulation, the ability for the environment around you to respond intelligently and automatically to environmental “triggers”, raises questions about accountability when something goes wrong and someone gets hurt. Artificial Intelligence learns from past experiences via, what is referred to as, “Reinforcement Learning” and then determines how to respond to situations. Traditional Law only holds the developer liable if they were able to foresee such injury.